Why Delivery is Just One Part of Off-Premises Jackpot 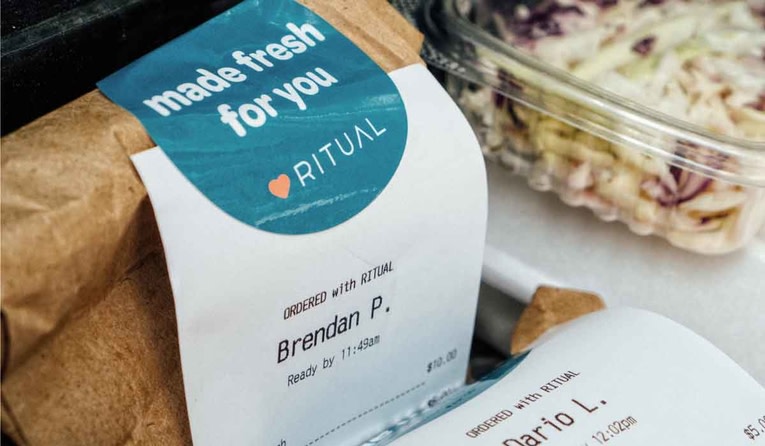 With most of his business coming the way of carry-out orders, it’s little surprise that Chicago Freshii franchisee David Grossman has leaned heavily on new technology to better serve ever-busy consumers. He’s signed up with two third-party delivery services, partnered with the office lunch service Fooda to cater workplace meals, and in early 2016 signed onto Ritual, which allows workers to order online and skip the line when they pick up in store.

That’s especially compelling for on-the-go diners—some even use Ritual as a time saver to hop the line before sitting down for lunch inside the restaurant. “I think it’s becoming more and more important,” Grossman says. “People are pressed for time.”

Like third-party delivery services, Ritual takes a cut of restaurant sales, though its 10 percent fee is smaller than many third-party delivery services. On the customer side, users never pay a fee for placing orders on the app. Ritual’s piggyback feature digitally alerts consumers when teammates place an order, allowing them to add a coffee or sandwich to a coworker’s run. That has multiplied ticket sizes in some cases for operators. Ritual orders now account for about 10 percent of the sales at Grossman’s three Windy City stores.

While the health-conscious Freshii brand proves an easy fit for the office lunchtime crowd, Grossman says Ritual would fit with any operators that traffic in to-go orders. “I think it could work for any restaurant concept where somebody does not want to wait in line,” he says. “You order it ahead and have it waiting for you.”

For decades, drive-thru and carry-out orders have been crucial in the limited-service arena, but new technology and changing consumer behavior have pushed restaurants to emphasize off-premises dining even more. Many have adopted third-party delivery services, lured by the promises of incremental sales growth and expanded customer bases.

Still, there are other ways to innovate around the off-premises experience: Chipotle’s new Rewards program incentivizes digital orders by offering more loyalty rewards for orders that come in through the app. The same goes for Moe’s Southwest Grill. One in five of that chain’s loyalty orders are placed digitally, improving restaurant efficiency as fewer people visit cash registers in stores.

Chick-fil-A announced in the fall that it would test new stores without dining rooms in Nashville and Louisville, Kentucky. The prototypes were built to pump out catering and delivery orders. With no drive thru, about 4,200 of the Nashville store’s 5,800 square feet are dedicated to the kitchen—more than double the size of the usual Chick-fil-A kitchen.

Luke Pipkin, the chain’s senior platform lead for innovation, says the design of the two new stores looks similar to its new full-line restaurants stores. But these prototypes are targeted squarely at accommodating the off-premises occasion.

“We are always looking for ways to provide a better experience for our guests and to meet them where they live their lives,” Pipkin says. “Our goal is to deliver a Chick-fil-A experience when and where people want it. That could be inside of one of our 2,300-plus restaurants or in the comfort of a guest’s home.”

But even as Chick-fil-A caters to the off-premises crowd, it hasn’t de-emphasized its marquee customer service. It just looks different, says Kirby Turnage, the brand’s senior business analyst for on-demand delivery programs and beyond the restaurant.

Inside stores, team members oftentimes know dine-in customers by name and will make time to chat alongside their table. But in busy markets like Manhattan, customers are in a hurry to get in and out.

“So hospitality means getting their order prepared as quickly as possible, but we strive to provide friendly customer service even in a few seconds,” Turnage says. “For our delivery customers, high-quality customer service might simply be getting an accurate and fresh meal to them quickly, so we are partnering with companies like DoorDash to provide that service.”

Ritual founder and CEO Ray Reddy says the growth in technology targeted at off-premises diners continues to reshape the industry. Apps can help stretch restaurants’ labor costs as fewer employees are needed outside the kitchen.

“It facilitates interesting redistribution of labor in a store,” he says. “We’re starting to see large chains deploy kiosks in stores to do things like this. Ultimately, what that means is just higher ROI on labor costs.”

Ritual is geared around the workday, primarily facilitating breakfast, lunch, and coffee orders. The piggyback function was an organic addition; consumers weren’t using the app alone but already pooling orders, so the company added the piggyback feature to facilitate the process. Users subscribe to notifications so they know when nearby coworkers place an order. They then have a few minutes to add their own purchase to the existing order.

Reddy likens it to the digital equivalent of turning around in a cubicle to see if anyone else wants a coffee. But it’s grown into a peer-to-peer delivery network, which allows many users to get their food delivered right to their desks at no cost.

Unlike most off-premises players, Ritual hasn’t pushed into the delivery game because of the high associated costs. Reddy believes Ritual’s fee-free design has been crucial to its success.

“Takeout is quite similar to delivery,” he says. “The question is going to be about the dine-in experience: How do you balance on-premises versus everything that has to leave your store?”